Greetings friends, Veeam has announced its new Update 4 for the already long-lived version 9.5 of Veeam Backup and Replication. The previous update was released in July and included support for vSphere 6.7 among many other things, but it is true that a lot of time has passed since then and that there were certain features that we were waiting for in this new Update 4.
Recording of the release of Veeam Backup & Replication v9.5 u4 live from Orlando 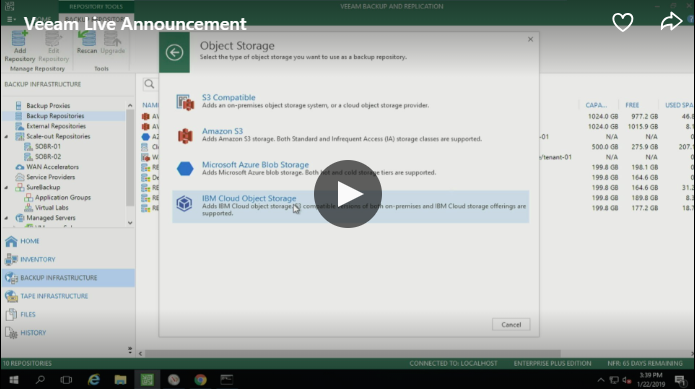 I leave you the moments to jump directly into the action (thanks to Anthony Spiteri):

With a What’s New of 23 pages it’s not easy to summarize everything, but I’m going to try and put the most important functionalities, we’ll see them one by one in following blogs:
Veeam Availability Suite v9.5 u4

The new Cloud-Ready Veeam licenses are the first portable subscription licenses in the industry and provide IT agility and workload mobility to multicloud enterprises:

This new solution, part of the Veeam Availability Platform, combines Veeam N2WS, the market leader in native cloud backup, and AWS workload recovery with the ability to consolidate backup data into a central Veeam repository. This new feature allows customers to reliably move data and manage it comprehensively in multicloud environments. It also