Greetings everyone, this blog post is a bit different, as it is to spread the awareness of a potential issue that might affect your environment if you, or your customers, upgrade to the latest ESXi 7.0 Update 3 Build 18644231 to be more precise.

Important News: VMware has pulled ESXi 7.0 Update 3, Update 3a, and Update 3b.

Everything you need to know, what is happening, official KB debrief, etc. In video

On their official KB 86100, they say the next “Thin provisioned virtual disks (VMDKs) residing on VMFS6 datastores, may cause multiple hosts in an HA cluster to fail with a purple diagnostic screen.”

Additionally, VMware has narrowed the issue to happen to what they mention aged datastores, without specifying what they mean with that:

In ESXi 7.0.3 release VMFS added a change to have uniform UNMAP granularities across VMFS & SE Sparse snapshot. As a part of this change maximum UNMAP granularity reported by VMFS was adjusted to 2GB. A TRIM/UNMAP request of 2GB issued from Guest OS can in rare situations result in a VMFS metadata transaction requiring lock acquisition of a large number of resource clusters (greater then 50 resources) which is not handled correctly in resulting in an ESXi PSOD. VMFS metadata transaction requiring lock actions on greater then 50 resource clusters is not common and can happen on aged datastores. This concern only impacts Thin Provisioned VMDKs, Thick, and Eager Zero Thick VMDKs are not impacted.

Thin-provisioned, and “aged datastores” (which I am assuming came from previous vSphere versions, VMFS5 or early VMFS6) are really a common use case out there, I have not seen many environments with all the VMs in thick mode, for obvious reasons, as every business will always try to squeeze as many VMs as possible, with moderation, on the same hardware (that is the very best foundation of virtualization, right? abstract the underline hardware and present it virtually to do more on the same hardware)

More information can be found on the VMware Communities where other Customers are sharing good stuff – https://communities.vmware.com/t5/ESXi-Discussions/ESXi-7-0-3-PSOD/td-p/2870776

The issue will trigger a PSOD (Purple Screen of Death) like this one, which is never pleasant to see. And it will force a reboot of the ESXi, until it is triggered again if the ESXis is in DRS, or have HA, the thin-provisioned VM will be vMotion to another host and trigger the same issue on the other Host, and that in a loop until all ESXis are down, the issue mentioned that it is probably when VMs which are thin-provisioned are booted up (not every time it seems): 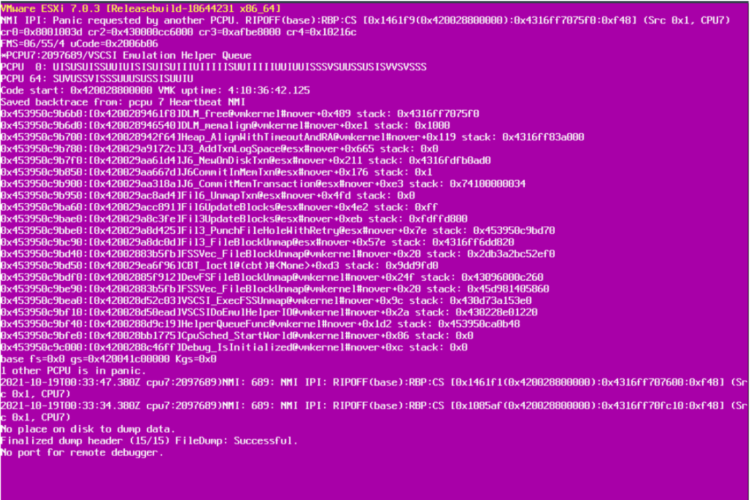 First, breathe, I know if you have ended on the official KB, or here, you might be panicking, there is not much you can do, but still, there are three options for now:

As a fourth option, I am sure VMware will release a Hotfix, or an ESXi patch soon to address this issue, until then. Stay tuned.

Hope this blog is useful, and I hope you read it before you go and do the upgrade.