Greetings friends, today I bring you a very interesting post, it's about everything you need to know about Veeam Availability for Nutanix v2.0, from its deployment to its installation and configuration.Veeam Availability for Nutanix v2.0 was released just a few days ago, and that's why we're going to see the whole process.It includes video and theory, let's go! As this post is a bit long, I leave you the menu in HTML as usual:

Veeam Availability for Nutanix - What is it and why do we need it in Acropolis environments?

Many years ago, back in 2015, I told you that Nutanix was launching its own Hypervisor, distancing itself from VMware or Hyper-V and including its own hypervisor to have better control of the hardware that Nutanix provides.It is true that Nutanix allows replication of VMs between different clusters, and of course, the Acropolis itself and the Nutanix topology offers high availability for all VMs. 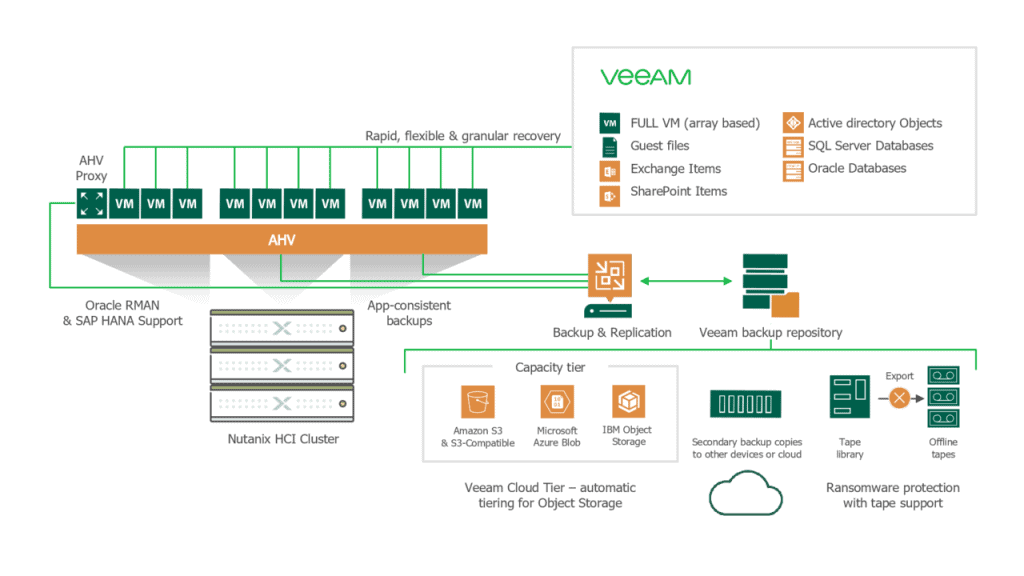 Greetings friends, we are approaching the last entries of this interesting series on how to protect the VMs using SLA policies, we have seen previously from the beginning of how to raise this protection system and to begin to create them in vSphere, how to create the policies in Veeam Backup & Replication, to assign the vSphere tags to the VMs that we want to protect and a very useful basic report for the administrators of each application.Today we are going to see in detail, how the Backup Infrastructure Administrators don't get their fingers caught in the resources, and how to create reports that help them understand which environment is busiest.

One of the best bird's eye views we have is the one called HEATMAP, which can be found in Veeam ONE Reports, in the Dashboards section. With a simple glance we can see that it is in amber or red, besides being able to see it by each component of the Infrastructure: 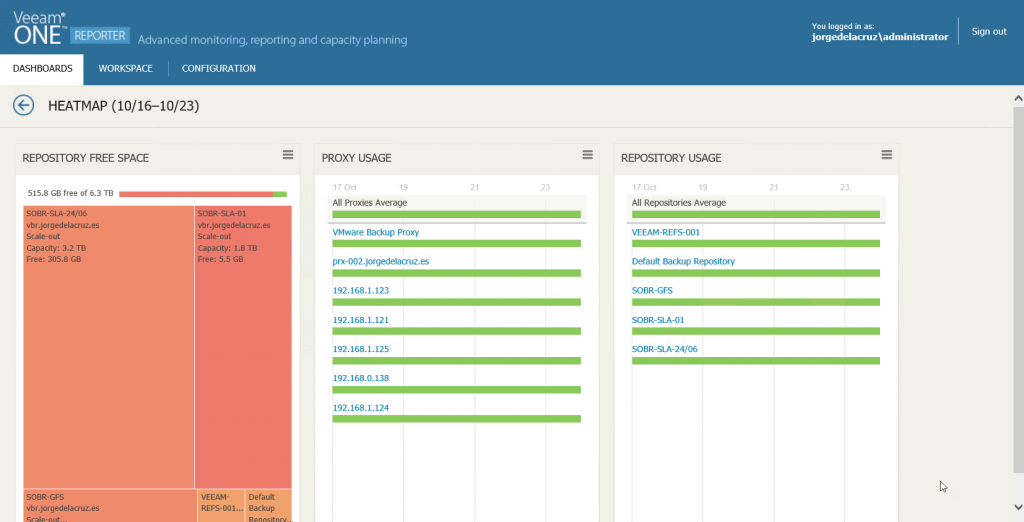 Greetings friends, we arrive at the fourth installment of this interesting series that you are enjoying very much. We have already seen in previous posts all that is needed to deploy backups using SLA policies, and it is now time to generate different reports and different views so that the different owners and managers of each application can know if their VMs are protected.

More than a year ago I wrote about how you could install the Veeam Enterprise Manager plugin on our VCSA to display information on the vSphere Web Client, and on the new vSphere Client (HTML5).Starting from the fact that we have already followed these simple steps, or if we were absent-minded, here is a screenshot where it is shown in a quick way:

Greetings friends, we come to the third entry on this interesting topic on how to protect a vSphere environment using Veeam Backup & Replication with SLA policies, we have seen in previous entries, how to design and create SLA policies in vSphere, and how to create the entire Veeam Backup & Replication infrastructure, today we will see how the owners or managers of each department can assign the policies to their workloads.

The first thing we will have to do is to grant the role of vSphere Tagging to the role that the different users or responsible of the workloads are using, for example, I have a very limited role, that only allows to do some operations in the VMs, and to this role, I have added the following permission: 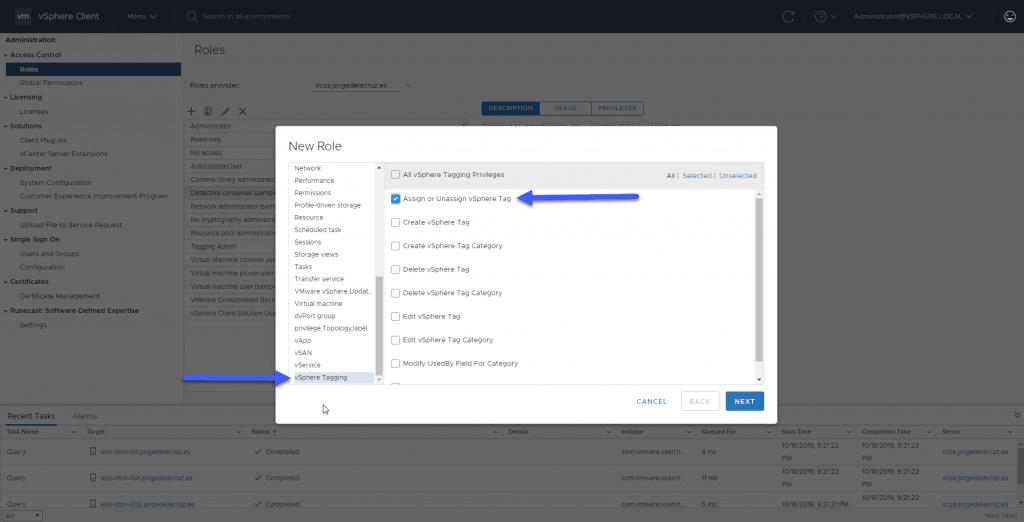 Greetings friends, I already told you in the previous post about how to deploy a backup system using SLA policies, and in that first post, the first steps were mentioned, especially creating the SLA architecture and policies in VMware as vSphere Tags.In this second entry, we're going to see how to create the Veeam architecture we mentioned in the first post, something similar to the following:

Greetings friends, for a long time I have found in more and more places the need of IT Departments to offer the backup as a service internally to the rest of the departments.This means that the IT and Backup managers create the entire infrastructure and backup possibilities, and it is the different managers of each application or group of applications who are responsible.

Create an SLA policy plan according to our business

The first thing we will have to do is sit down and create these SLA plans, according to the needs and obligations of our company. For example, let's imagine that we have three different levels of protection for our environment. 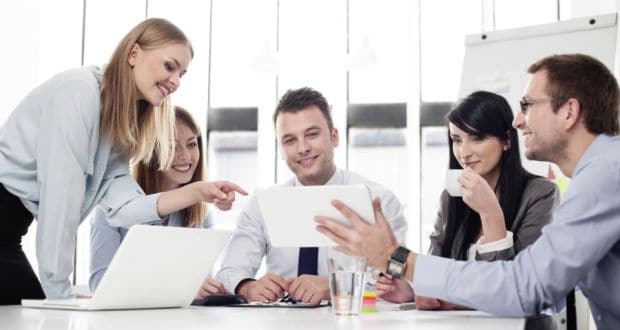 Greetings friends, a few weeks back I had the pleasure to co-present another Whiteboarding live-session with Alex Fraser (Senior Systems Engineer UKI).The session which you can watch for free, and without any registration, if you do a little scrolling, covers how having a data backup and recovery plan is important to the overall success of your business. And what you need is to choose the strategy, that allows you to consider features of your infrastructure, meet RTO and RPO requirements, allows you to reduce operational costs during backup.
END_OF_DOCUMENT_TOKEN_TO_BE_REPLACED
Posted on 7th January 202031st May 2020opensource

Greetings friends, I bring you a new entry about Grafana and Veeam, which I'm sure you'll like and put in your labs. Back in 2017 I told you how they monitor Veeam using the PowerShell CMDlets and also how to do it using PowerShell and Enterprise Manager RESTful API. These entries have had tens of thousands of hits, but they were more of a proof of concept as they were missing a lot of detail.Today, I am pleased to bring you a complete and finished Dashboard to monitor Veeam Backup & Replication, without limit of servers, jobs, VMs or Repos, thanks to Veeam Enterprise Manager and its RESTful API (only in Enterprise Plus)

When you finish the entry you will have something similar to that Dashboard that will allow you to visualize: 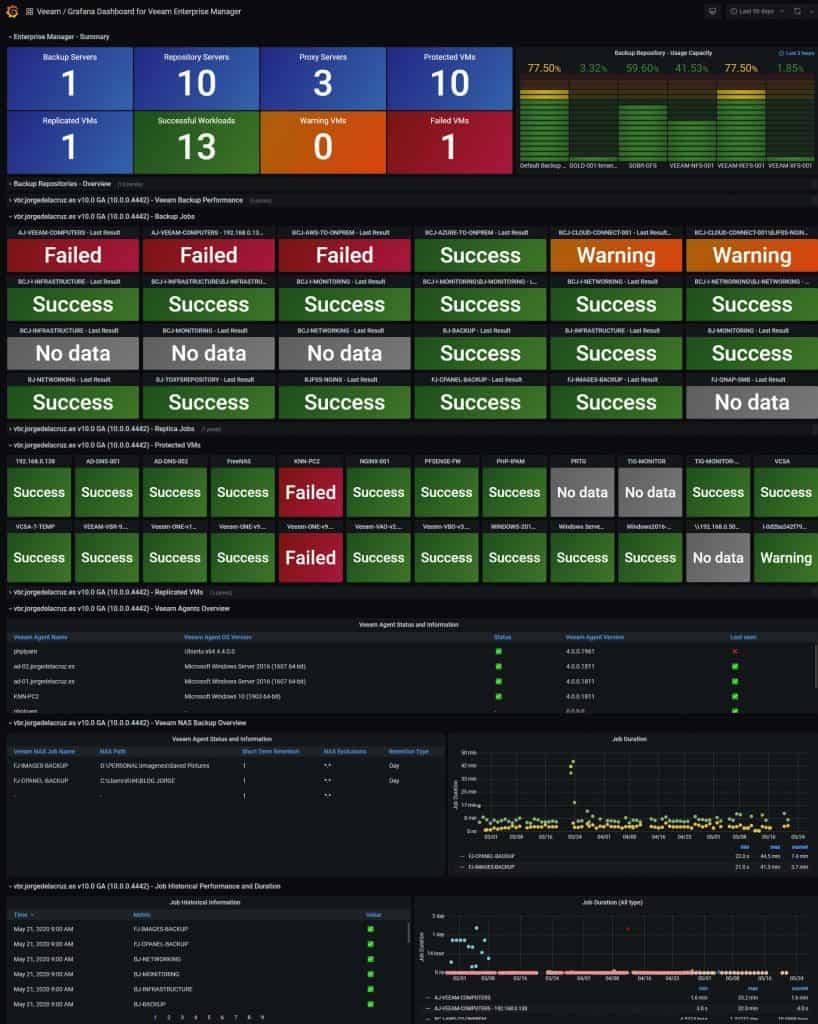 Greetings friends, a few days ago I told you that Veeam Backup for Microsoft Office 365 v4 was in public beta, besides showing you how we could use FreeNAS with Object Storage enabled to launch our copies directly to Object Storage.So far so good, I have received very good feedback on this post, but today I wanted to show you all the news coming in Veeam Backup for Microsoft Office 365 v4, according to the beta I'm testing. 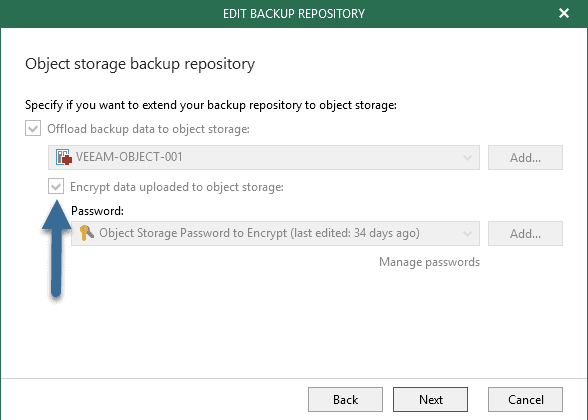 We'll have to run several steps before we start downloading anything, or even touching Grafana, from our Veeam Backup for Microsoft Office 365, we'll go in the Console to the menu icon, and then General Settings:

We will go to the sub-menu called REST API and enable the REST service, also here we could install our own SSL, and change the timeout of the tokens and SSL port, in my case I have not changed anything:
END_OF_DOCUMENT_TOKEN_TO_BE_REPLACED