Greetings friends, we arrive at the last entry about HPE StoreOnce for now, today we will talk about how to present a Catalyst Store in Veeam Backup & Replication. Remember that we have been talking about the great HPE StoreOnce, the appliance par excellence of HPE that allows us to achieve unthinkable ratios of deduplication, in addition to giving us extra security as immutability for our stores, replication, etc. I have decided to divide this series into several blogs, to make it more comfortable for you to consume, please click on the article that suits you best:

If we have followed the steps of previous blogs, we already have our HPE StoreOnce Catalyst Store created and ready to be consumed, in the Veeam console, we will go to Backup Infrastructure: 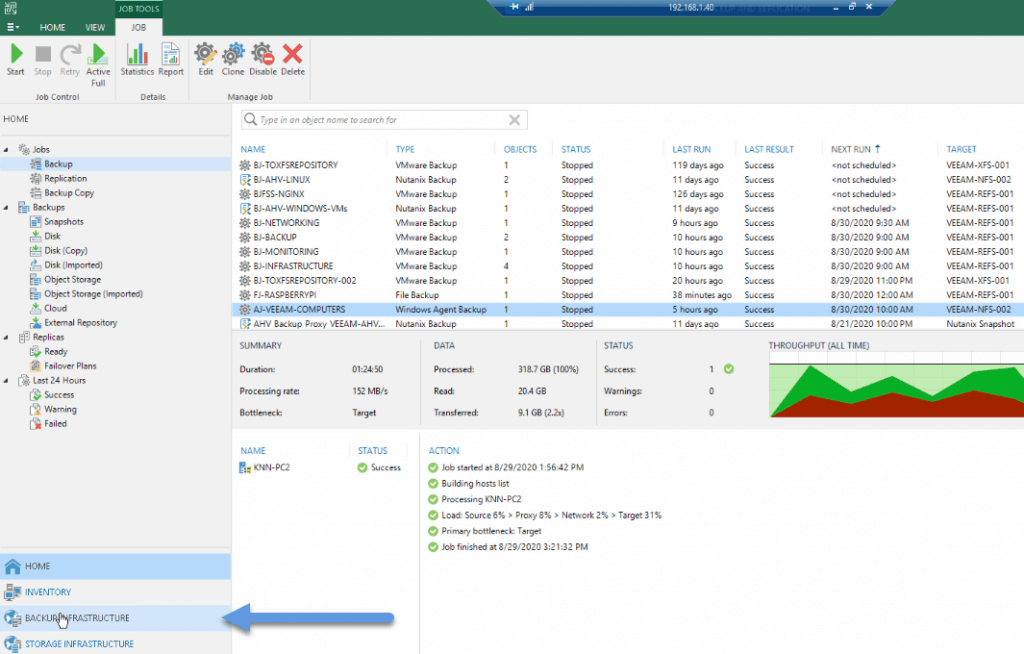 In Backup Repositories, we will do right button, and select Add backup repository:

In this case we will select the special category that Veeam has for enterprise storage, called Deduplicating storage appliance: 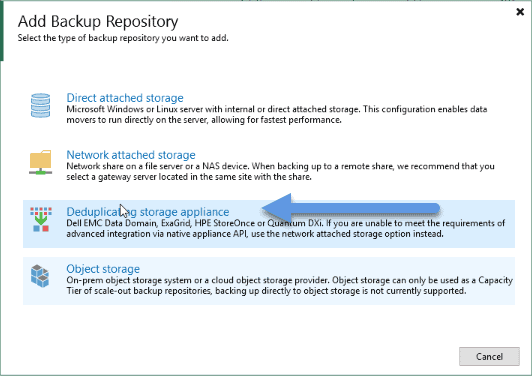 In this case we will select HPE StoreOnce, in our case we are using the VSA G4: 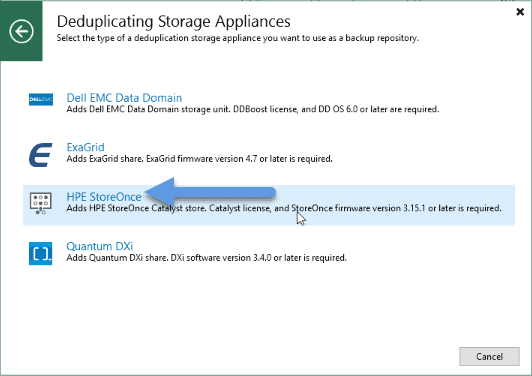 We will introduce a name of Repository, in my case something descriptive: 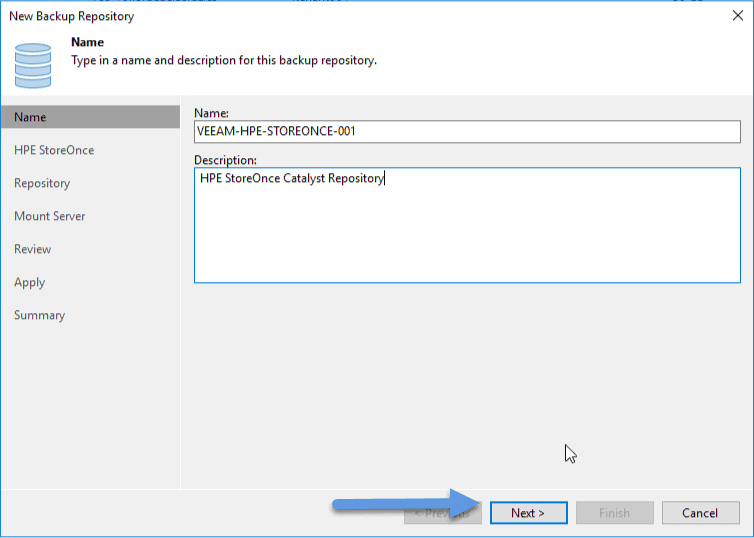 We will introduce the FQDN, or IP of our HPE StoreOnce, besides creating or selecting the user that we have created in the previous post: 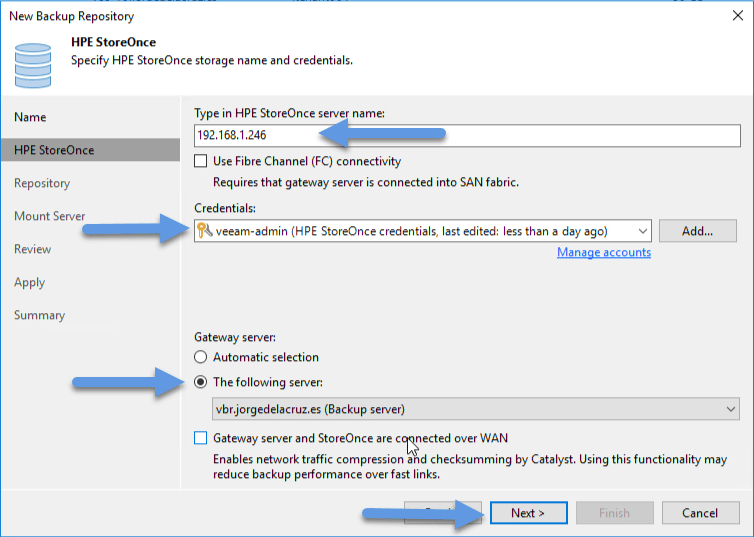 We will select the Catalyst Store that we want, since we could have several, clear, in addition the number of concurrent tasks, and we will click on Advanced: 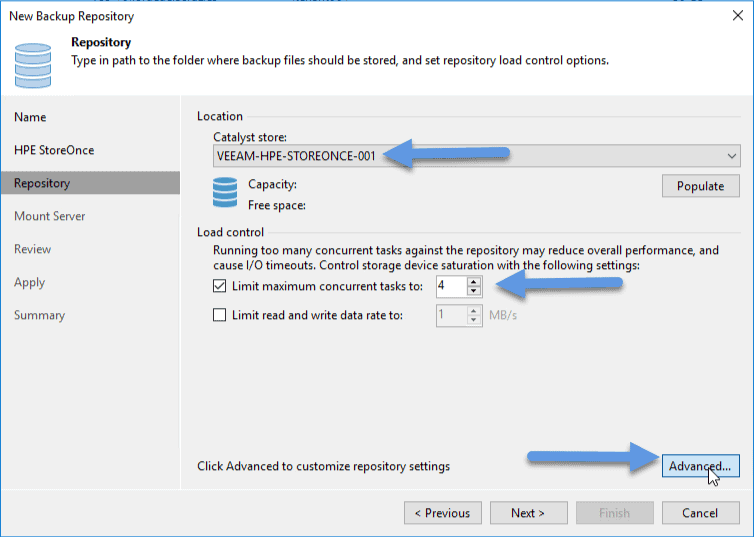 We will select these two options to have the maximum performance when we store backups in HPE StoreOnce: 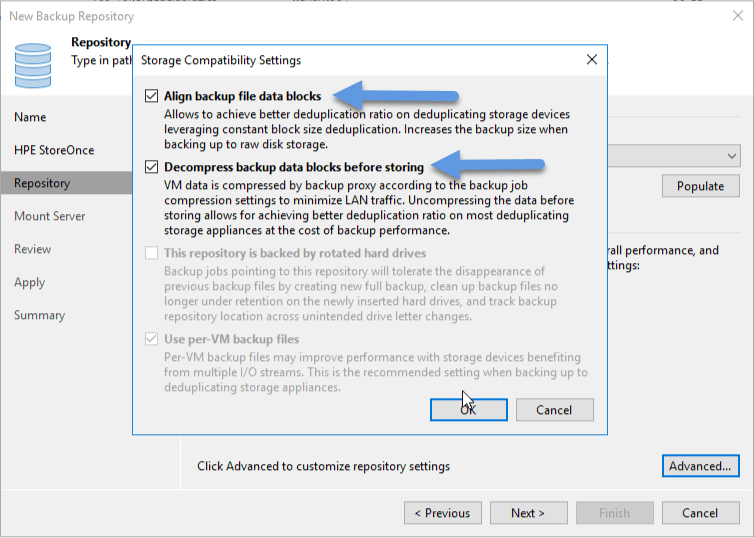 With all this, we will already see how the repository is created without any problem: 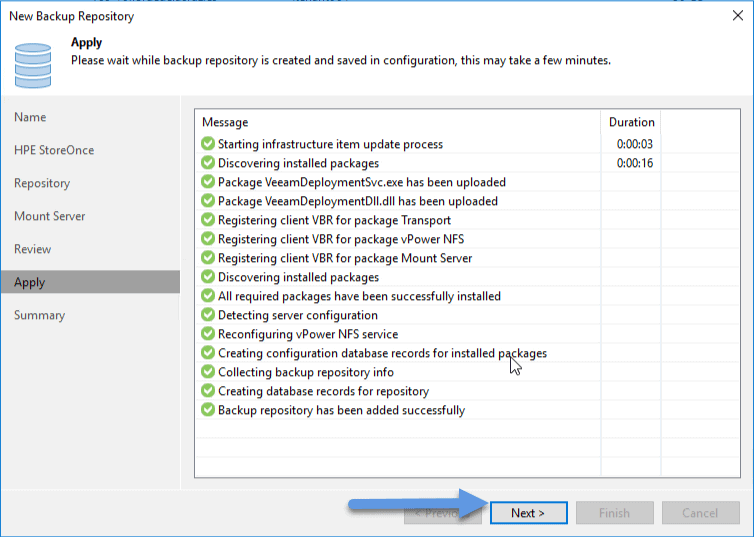 And we will already be able to see the Summary that everything has been created without any type of problem: 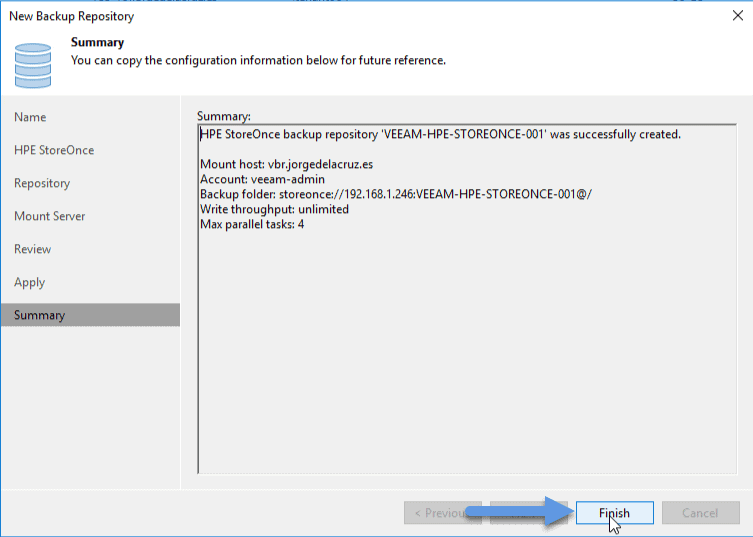 We already have everything ready to move to the following step.

HPE StoreOnce is specially designed to launch Backup Copies, and store in it a lot of weekly, monthly, or yearly. It doesn’t make much sense to use it as a main backup repository, Veeam doesn’t recommend it, but of course, we could use it anyway. In my case a Backup Copy:

A descriptive name, in my case I still like more the Periodic copy (pruning): 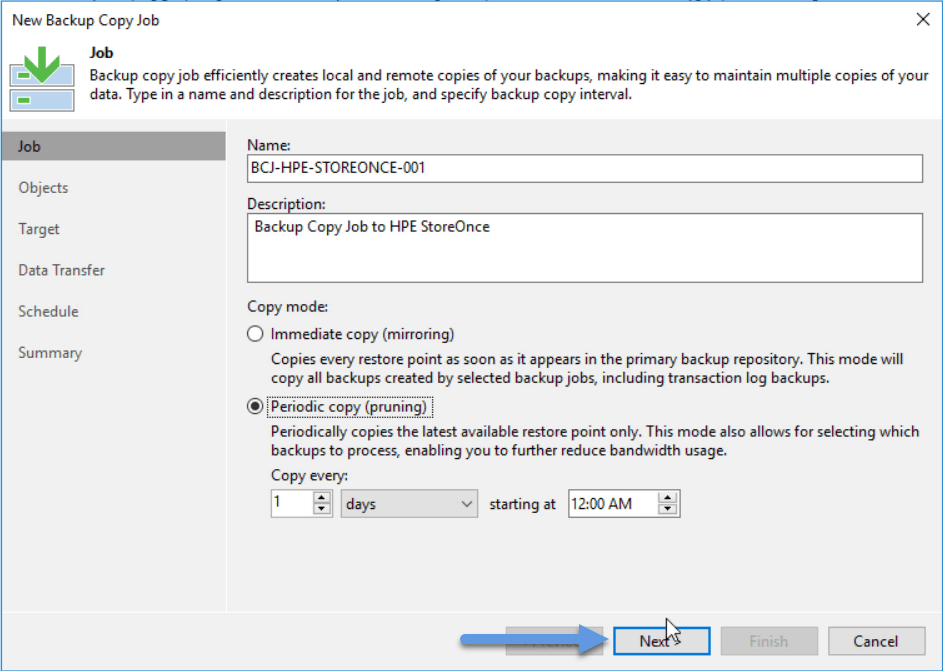 We will select the VMs that we want to store in HPE StoreOnce, or we could directly copy all a job, or several whole jobs, what you want: 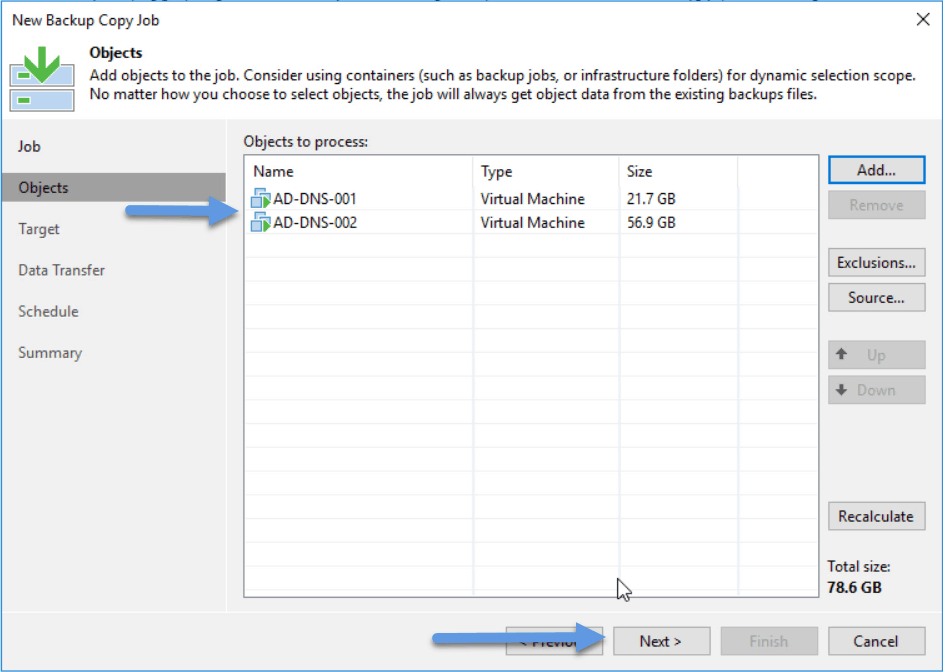 We select now the Backup Repository that we have created before, in daily we select 7, and then already in weekly, monthly and yearly, to your taste and need: 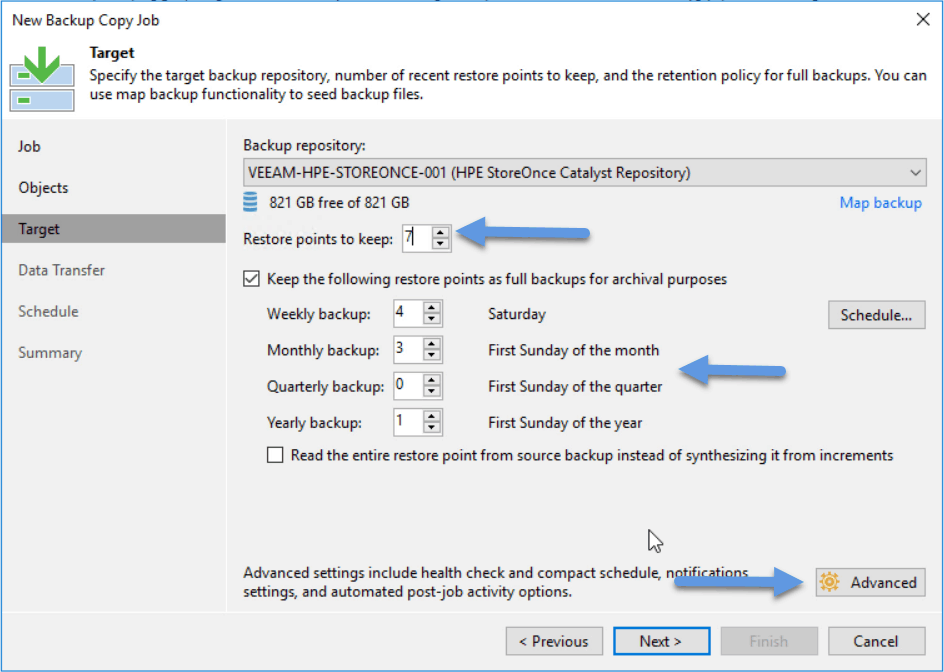 In Advanced, I have assured that the jobs that we store are in Dedupe-friendly, or in None. If we select Auto, it will leave the backup as it comes from the Backup Job, that may not be the best to store in HPE StoreOnce, I recommend you to mark one of the two options that I have mentioned: 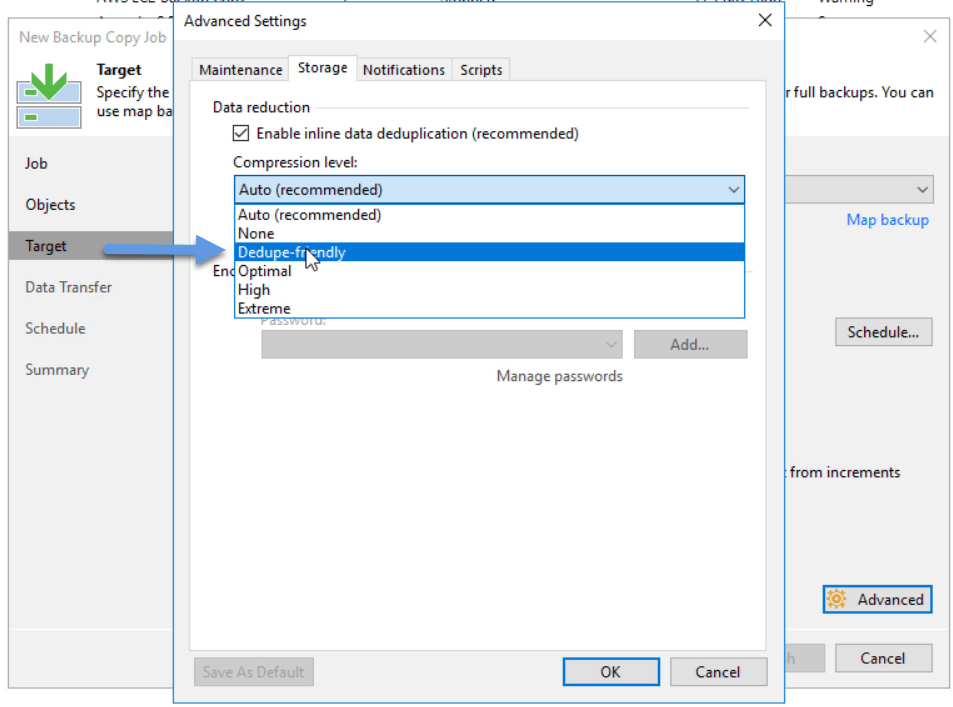 We already have everything created, we finish the wizard, and we tell it to be executed: 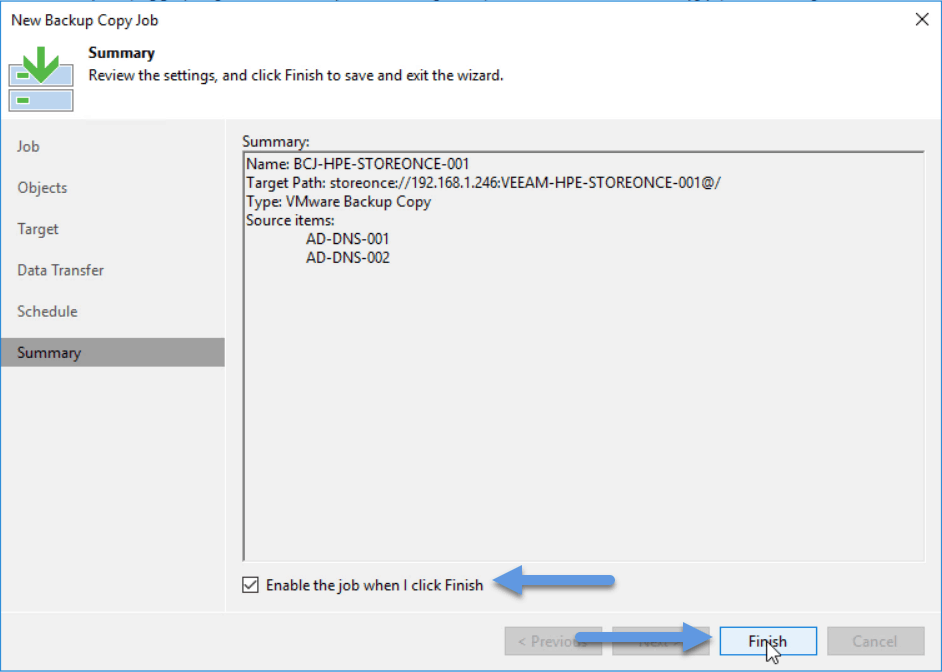 Once it is executed, we will see the speed to which it reads from the Backup Repo, and to the speed that writes in the HPE StoreOnce: 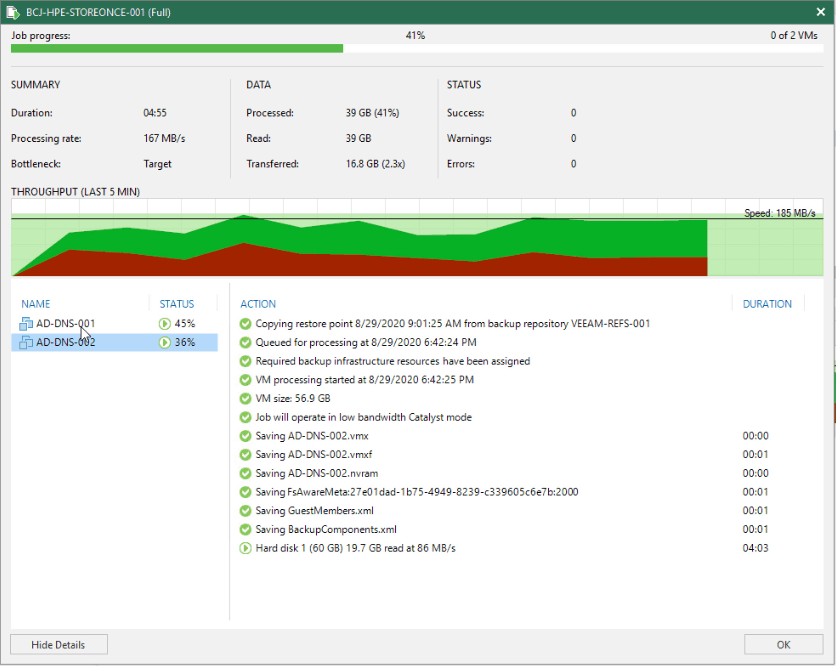 We have already finished, we will have copies in our Repository ready to be restored.

Okay, we have everything, we have created everything, launched backups, let’s imagine for a few weeks, we will want to see now how much we are saving discs, some numbers in general.

Back to our HPE StoreOnce VSA G4, we will go to Data Services – Catalyst Stores, we will click on our Store, and we will see the following. In my case, a Dedupe ratio of 17.3:1 which is from 324.1Gb that I would have in the normal disk, StoreOnce has deduplicated it in only 18.7GB, what madness! 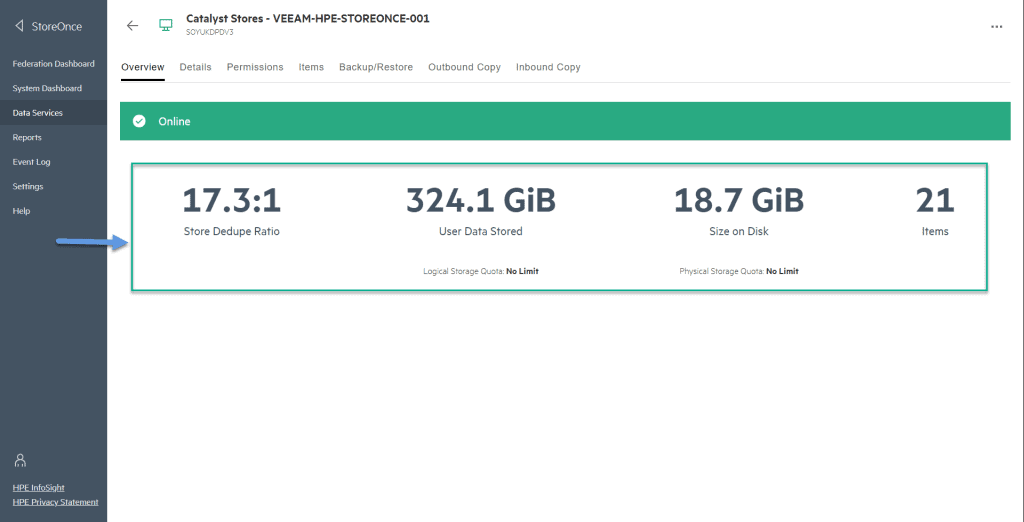 If we want to see a little more detail about transferred MB, etc, in Reports, we have the Backup/Restore: 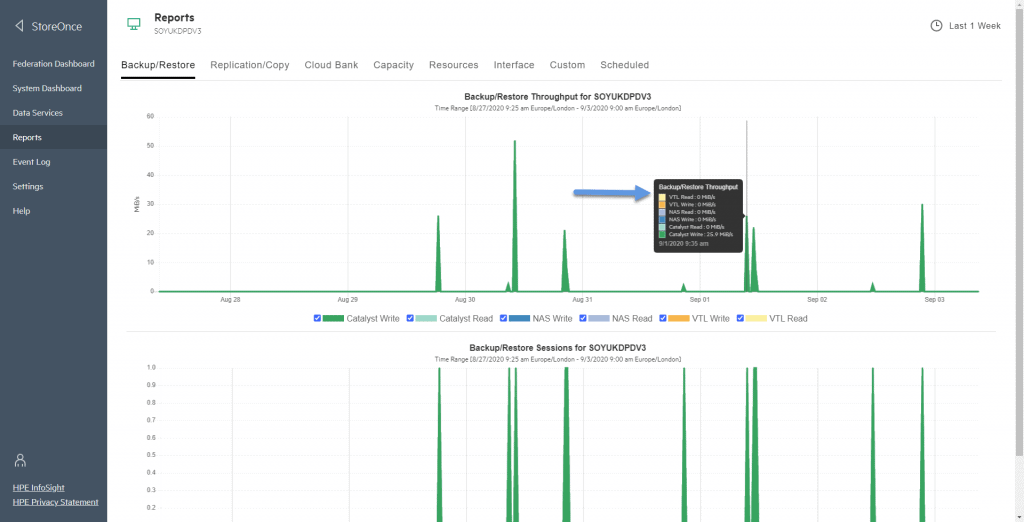 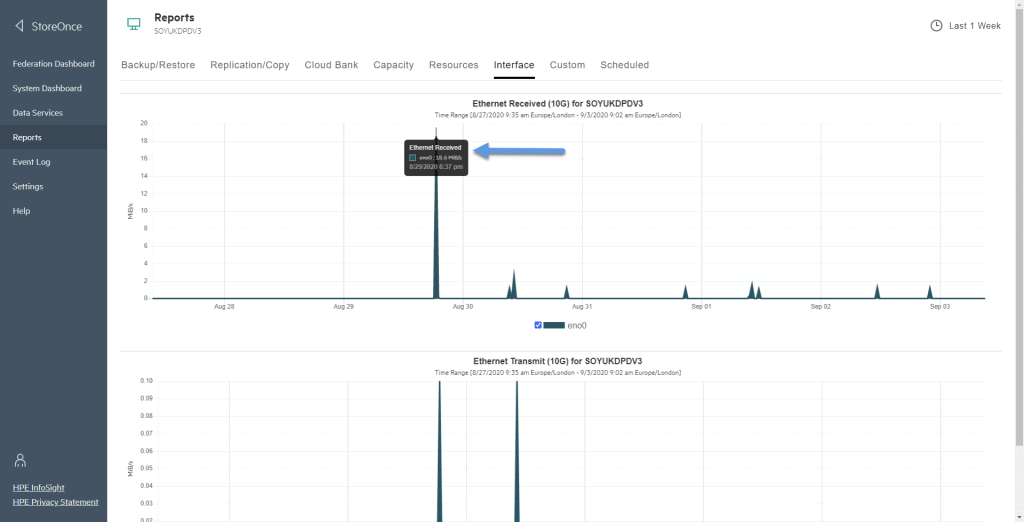 And if we look at the Capacity tab, we see that we have been adding more backups, but the actual disk space has barely gone up, while the deduplication time has grown exponentially: 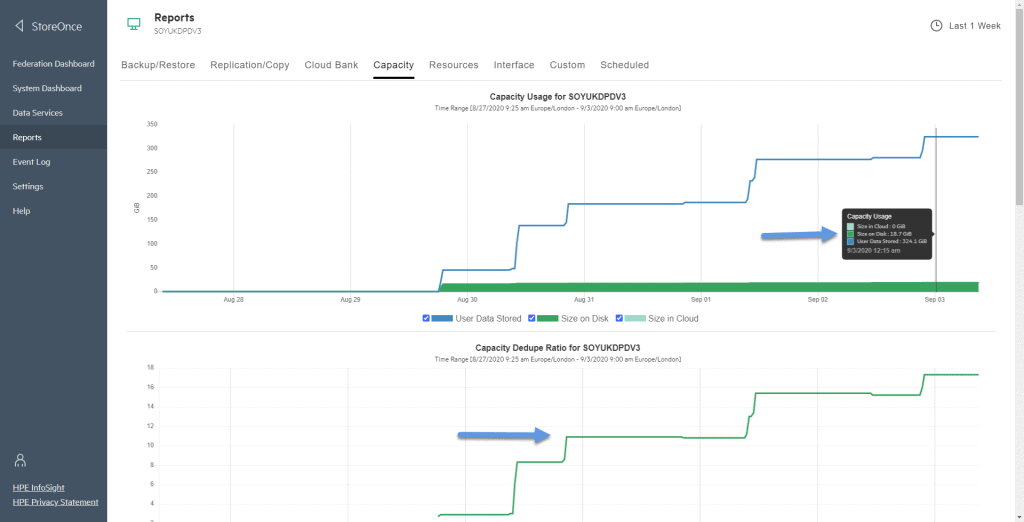 Until here, this blog entry arrives, don’t forget to look at the rest of the entries, as you want: